Home » Press centre » Authorities Reaffirm the Montevideo Consensus as the Basis for a Comprehensive Road Map for Action on Population and Development
Available in: EnglishEspañol

At the conclusion of the fourth session of the Regional Conference on Population and Development, countries urged for strengthening multilateralism, solidarity and international cooperation.
30 June 2022 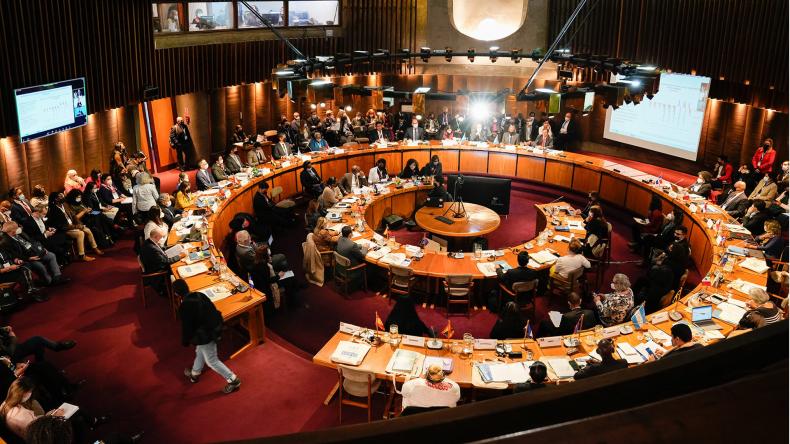 Representatives of Latin American and Caribbean countries reaffirmed the Montevideo Consensus as the basis for a comprehensive road map for national and regional action on population and development matters, on the final day of the fourth session of the Regional Conference on Population and Development, which concluded this Thursday at the headquarters of the Economic Commission for Latin America and the Caribbean (ECLAC) in Santiago, Chile.

In their resolutions, countries recognized the strategic role of the Montevideo Consensus on Population and Development as a framework for implementing actions that would contribute to responding to the COVID-19 pandemic’s repercussions on the population’s living conditions and its exercise of rights, the multiple axes of inequality, and the three dimensions of sustainable development – economic, social and environmental – with a view to recovery and social and economic transformation.

Furthermore, they called for enhancing fulfillment of the priority measures of the Montevideo Consensus through the execution of specific actions, the adequate allocation of resources, and the creation and strengthening of institutional mechanisms for its implementation and follow-up, especially with regard to assisting populations severely affected by the COVID-19 pandemic.

The closing ceremony was led by Raúl García-Buchaca, Deputy Executive Secretary for Management and Programme Analysis of ECLAC; Harold Robinson, Regional Director for Latin America and the Caribbean of the United Nations Population Fund (UNFPA); and David Guachalla, Vice Minister of Planning and Coordination of Bolivia, in his capacity as Chair of the Presiding Officers of the Regional Conference on Population and Development.

At the meeting, which brought together more than 1,300 people – half of them in person – the authorities emphasized that amid an unprecedented international context such as the one marked by the COVID-19 pandemic, it is necessary to strengthen multilateralism, solidarity and international cooperation to achieve full implementation of the Montevideo Consensus, the Programme of Action of the International Conference on Population and Development beyond 2014, and the 2030 Agenda’s Sustainable Development Goals.

The three-day event drew the participation of more than 220 delegates from 30 member countries of ECLAC and one associate member, in addition to around 100 representatives of the United Nations System, 18 from cooperation agencies, and more than 640 representatives of civil society, academia and the private sector. They were joined by thousands of people who followed the meeting on social platforms and via public transmission of the sessions.

“We have once again reaffirmed our commitment to the Montevideo Consensus, which, together with the 2030 Agenda, are indispensable and very relevant tools for undertaking the tasks needed for a transformative recovery that places equality, sustainability and people at the center,” Raúl García-Buchaca, ECLAC’s Deputy Executive Secretary for Management and Programme Analysis, affirmed in his closing remarks.

Meanwhile, Harold Robinson, Regional Director for Latin America and the Caribbean of UNFPA, pointed up countries’ “strong reaffirmation” of the Conference’s validity and emphasized that the Montevideo Consensus, which has been embraced as the instrument that changes Latin America and the Caribbean’s historical path, “will only be useful once it becomes our collective destination.”

David Guachalla, Vice Minister of Planning and Coordination of Bolivia, underlined that at the fourth session of the Regional Conference on Population and Development – nine years after the first such gathering – “Bolivia is being passed the baton and assumes with great respect, gratitude and commitment the Chair of the Presiding Officers, a task we will carry out with the utmost responsibility.”

The document of resolutions approved by participating countries encourages the region’s governments to put special emphasis on strengthening their systems for sociodemographic and vital statistics, and to develop and strengthen the capacities of national statistical systems and national statistics offices to produce population data, disaggregated by sex, age, area of residence (urban or rural areas), income, ethno-racial identity, migratory status, disability and other characteristics that are relevant to the population’s diversity and are needed to make an accurate assessment of the implementation of the Montevideo Consensus.

It also congratulates ECLAC on developing and implementing the virtual platform to contribute to follow-up of the Montevideo Consensus on Population and Development, a space that brings together the main initiatives reported by countries and achievements made with regard to the population, their living conditions, the exercise of their rights and their development. In other words, it procures to systematize the processes and outcomes achieved in the region towards fulfillment of the commitments assumed in relation to the Montevideo Consensus.

The resolutions also recognize the crucial role of civil society organizations, the private sector and academia in the implementation, follow-up, evaluation processes and dissemination of the Montevideo Consensus on Population and Development.

While Bolivia serves as Chair of the Presiding Officers of the Regional Conference on Population and Development, the Vice Chairs will be held by Argentina, Chile, Cuba, Honduras, Jamaica, Mexico, Panama, Peru, Saint Lucia, Suriname, Uruguay and Venezuela.